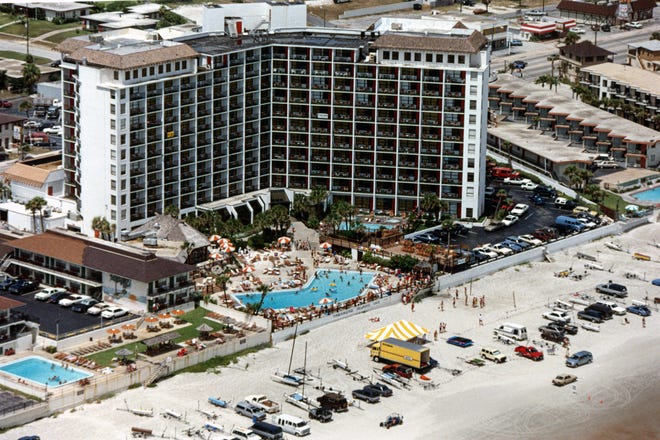 Has he really been sitting like this for a decade?

Even then, the trial had been brewing for some time, but it was legally complicated. About a dozen defendants had to be named because it was not known who owned them – all these liens, bankruptcies, creditors, suits and counter-suits.

Now, as News-Journal editor, Jim Abbott recently reported, the city may in fact want it.

Mark Lane:An abandoned beach hotel is not a treasure

From 2017:New hotel planned for the Treasure Island site

The 11-story resort resembles something of a war zone, a graffiti-covered skeletal outline of an old resort. It wasn’t a zombie house that was quietly rotting and destroying the appearance of a neighborhood. It was an imposing ruin on the main street of the city. A monument to storms, economic downturns and the vicissitudes of an unstable tourist and real estate market. An essential warning to any potential investor in the region.

The place has been dark since the 2004 hurricanes. Then-owners Bray & Gillespie, a real estate company that once owned 35 beachfront hotels, said they would reopen the place by June 2005. This is not the case.

Instead, there were hurricane punches one-two-three and the bursting of the great Florida real estate bubble followed by the Great Recession.

It was all the sadder since the place was once a prime property. A place that illustrated a period of high water for family tourism here. A hotel that could stand up to the big hotel chains. An all inclusive vacation experience with a Tiki bar, two swimming pools, conference rooms, a gift shop and the Billy Bone Tavern where Patti and Marti performed your requests every night. There was a large entrance with a huge Polynesian-style wooden roof, shading the path to a spacious hall.

This wasn’t a family-friendly Atlantic Avenue motel with a cracked asphalt parking lot and a flashing “A / C free, vacancy” sign, it would be the new era of local tourism. More upscale, away from the traditional core of Daytona Beach. Everything you could want on the beach.

For a momentous period in the 1970s and 1980s, Treasure Island was a success and suggested that a more prosperous seaside and tourist economy awaited the region if investors could only start to think big.

But then, well, things happened.

About eight years ago, investor-commissioned architects concluded that, yes, the building was not necessarily lost. He has, as the real estate people say, good bones. Rebuilding on a stripped-down hotel shell would cost millions less than building a new structure from scratch. At the time, it seemed quite plausible. In 2017, the owners announced plans for a major rebuild. A four star hotel! A return to its former glory. It could happen.

Now, after many years of neglect, storms, and salty winds, maybe these bones aren’t as good as they are. And after the Surfside Condominium collapse in June, such an ambitious rebuilding plan on damaged bones looks like an even tougher sell.

So now the city is planning to demolish the hotel again. Something that had to happen a long, long time ago. Something that happened a long time ago to several other small 1970s hotels along Atlantic Avenue after the punches of the 2004 hurricane season. These almost 17 years of disuse and disrepair demonstrate that, at at the very least, Daytona Beach Shores has shown unwavering patience for what has become the area’s most imposing nuisance property.

Still, it’s sad that a building that had so much potential, that was such a centerpiece, that was the backdrop for so many good times, had come to this.

Mark Lane is a News-Journal columnist. His email is [email protected]