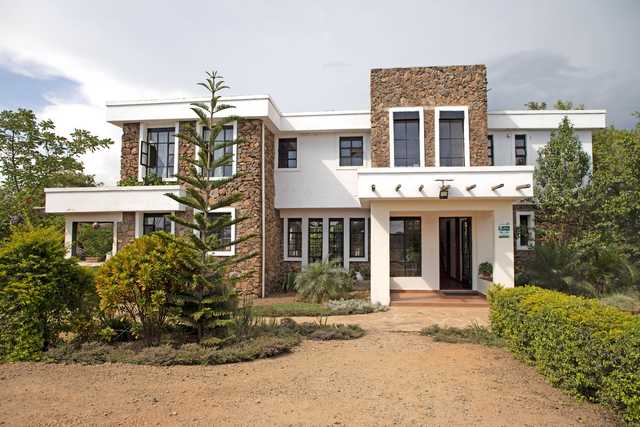 “I transformed my house into a hotel”

About 40 minutes from Bondo town, I am introduced to this beautiful house in Sakwa, right on the shores of Lake Victoria. Pikidi Gardens, near Liunda Beach, was once a family home, but Dorothy Achieng ‘turned it into a hotel, though that’s not exactly the game plan.

“When we bought this land around 2015, it was to build our family home,” says Dorothy.

“While we were doing the construction and felt like we lived here, we thought the location was too good to keep only for our family of five. We started building the main house in February 2017 and moved in August 2018. At that time it was habitable but not finished, ”she adds.

In designing the house, Dorothy didn’t have to look for an architect since there were three family members.

“After visiting the site, given its beautiful view of the lake, we asked all the architects in the family to come up with a sketch that would also take into account environmental challenges such as heat {because Bondo is known to be a hot region }, ”Says Dorothy.

Two architects proposed sketches. His eldest son, Ted, was in his final year of college at the time, and his idea won out. Its architectural plan was airy and there was cross ventilation throughout the design of the house.

“I had an office and we fine-tuned the plan there, and then we got the approvals from the county government and I brought it in and had to ‘watch’ the project until the end, and we have the house now, ”she said.

Nestled in a bush

Designing and building the house, she said, was very easy because the builders followed the plan. Landscaping was not easy, however, as the land was just a thick bush.

“You couldn’t even walk to the water because it was so bushy. Getting the scenery to a point where you could even have terraces that lead down to the lake was a daunting task. I had to work directly with the fundis every day, putting down every stone, step, planter … everything. It was exciting but really tedious, ”she says.

For building materials, they brought terracotta tiles from CTM to Nairobi, and the exterior rubble walls came from the site itself and the nearby village. They asked the villagers to collect what they had on their farms, and when the pile was big enough to be transported, the family bought it.

The main house is very spacious with three bedrooms, two living rooms, a dining room, a kitchen and a roof terrace, perfect for watching the sunrise over their fried tilapia with ghee, brown ugali and vegetables. traditionally prepared.

Salon in the gardens of Pikidi. PHOTO | BOWL

“We first set up a campsite and we have tents. Right now we have 12 tents that can accommodate 24 people, ”she says.

A year ago, just before opening her house to guests, she built three more individual units; two bedroom gîte, and a family gîte which can accommodate up to five people.

“My family is still based in Nairobi, and I was the one on the ground to make sure everything was going well. I have been here continuously since the pandemic and they {family members} come to visit me, ”she said.

Rural areas have changed. There was a lot of real estate growth – nice houses and apartment buildings where there were thatched houses and little bungalows. In rural areas, the main draw for host families is the unspoiled greenery which is becoming increasingly scarce in cities as trees are cut down to pave the way for more construction.

In Sakwa, the incredible sunsets over the lake, a plethora of birds that fill the air with songs at dawn and the water in which guests can even swim or fish, is a plus.

Building a hotel in Sakwa, about a six to eight hour drive from Nairobi by road, would have seemed like a far-fetched investment idea a few years ago.

“We started out as a house, so it works for us anyway,” says Dorothy.

“After deciding to make it a hotel, we knew it would take a lot of marketing. What encourages us is that we get a lot of referrals and loyal customers. People get curious when they see it online. They think ‘this place can’t be in Sakwa’ … so they come to confirm that it exists and that we built it in the middle of nowhere, ”she said, adding that most of her guests are from former Sakwa residents who now live in Nairobi and come to Pikidi when they are on vacation. Others were from the Rift Valley, especially Eldoret and Kericho.

Dorothy also organizes excursions to the island of Ndede, a small fishing village. Hotel charges vary from Sh 3,000 to Sh 20,000 per night.

In Luo, the name of the hotel, Pikidi means water and rocks, which testifies to the beautiful topography of the region.

The decor of the house is quintessentially African, and the family intends to turn it into a small museum. In the living room there are fishermen’s oars, brooms, calabashes as wall art, a Nyatiti musical instrument propped up under a window, traditional drums and other items distinct from this part of Kenya.

She turned the house into a hotel a year and a half ago, but bookings were very low during the pandemic and still are. To occupy its staff of seven workers, it engages them in other activities such as agriculture.

“As soon as people know that there are such places in rural areas, others will be able to come and experience the rugged beauty of our little corner by the lake,” says Dorothy.

Tripadvisor: 55% of Americans plan to travel this winter