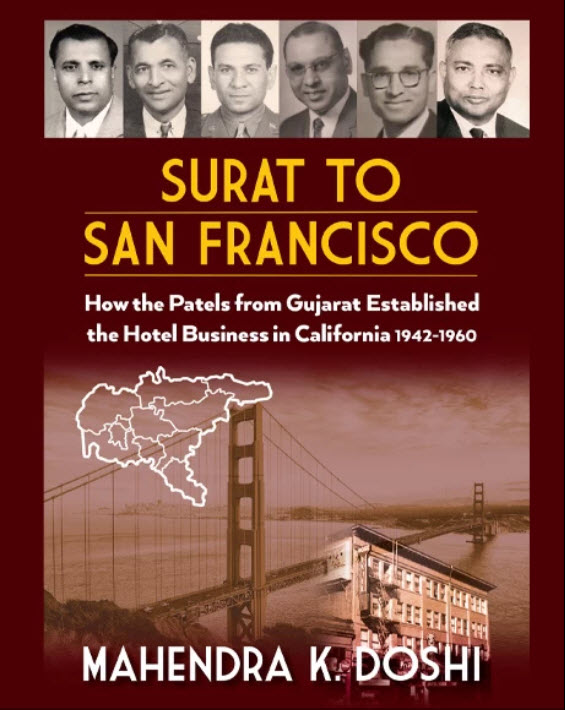 A significant number of San Francisco’s SRO hotels have long been owned by Indian-American families. Most trace their ancestry to the Indian state of Gujarat. Many carry the Patel surname. When I came to the Tenderloin in 1979 I was told ‘Patel’ was Gujarat for innkeeper. This false claim was widely believed in the neighborhood. This reflects a wider ignorance of so-called ‘Patel Hotels’ that persists to this day.

One of the reasons for this ignorance is that very little has been written about this group of hotel owners. Mahendra Doshi just released Surat to San Francisco is the first book centered on their story. Subtitled “How the Patels of Gujarat Established the Hospitality Industry in California 1942-1960”, the book explains how this model of ownership in ORS and then motels and hotels came into being.

This story is long overdue. My knowledge of SRO ownership models begins after the end of this book. Little did I know that in the 1950s, SOMA’s Goldfine Hotel became the meeting place for over 35 immigrants who became hoteliers. Nor did I know that many of the SOMA hotels destroyed by the SF Redevelopment Agency for “urban renewal” were Indian owned or operated.

One wonders if resistance to this government-funded destruction of approximately 5,000 homes would have progressed to the same level if politically more powerful people had controlled these ORS.

Doshi emphasizes community solidarity as a driver of hotel acquisitions. The Patel community helped each other succeed in every way possible, including helping to collect the $2,000 required from Indian immigrants to obtain a visa for America (a 1946 law opened Gujarat immigration to 100 “lucky” visa holders every year). He identifies three men as being behind the Patels’ adoption of the hotel business. I knew them all.

Bhulabhai Patel was the first Patel to buy an SRO in San Francisco’s Tenderloin, the William Penn in 1960. I met his late son, Ramanbhai, in 1983 when I was helping tenants with housing issues. livability of the hotel. This started a relationship that continued until his death in 2019. Raman was one of the best people I have known in my over forty years at Tenderloin Housing Clinic. He taught me a lot about the inner workings of SROs. He broke down the economics of SROs and showed why they don’t work in the current system. Raman and another hotel owner, Ramesh Patel, paved the way for THC’s Modified Payment Scheme to become the primary source of housing for homeless single adults beginning in 1989.

When THC ran into trouble in 2004 with the Union Hotel owner’s grandfather agreeing to rent the SRO’s beautiful, fully private bathroom, Raman asked his father to intervene. Bhulabhai was living in India at the time, as was the grandfather. In a single meeting, Bhulabhai resolved the issues and the lease for the Union continued. He was the kind of generous man he and his son were.

The second key community leader, Dahyabhai Patel, was known as “DR”. THC used the Delta hotel he rented at 88 6e for years (now the Bayanihan House), and got to know her daughter Prabha quite well (I saw Prabha last week for the first time in years; the children I saw her raise at the Delta hotel now run tourist hotels on Lombard Street). DR’s impact on the Indian hotel community is undeniable. He was a more controversial figure than the other two leaders, and neither he nor his son interacted much with the Tenderloin or Sixth Street community.

The third founding figure and the one I knew best was Dhanjibhai Patel. Everything I read about Dhanji in the book was consistent with my experience. He always wore a jacket and tie, reflecting his training as a lawyer in India. He has always sought to resolve disputes, which explains his role in the community as a mediator and problem solver.

I spent a lot of time with Dhanji’s sons, Vimal and Nitin, as they searched for a way out of the San Francisco SRO community. The family ran tourist accommodation in the South Bay, the two brothers lived in the South Bay (as did Bhulabhai Patel), but they owned the Altamont Hotel on the 16the Rue and the Rose at 6e (where they spent time when they were children). I worked with Vimal to arrange the sale of the Altamont to Mission Housing and the Rose to Mercy Housing.

I mention these events after 1960 to provide a larger context for the book. Indian ownership of San Francisco’s SRO hotels did not become a major public issue until the “heatless hotels” scandal of December 1982. I do not know of a single book that tells how these owners rose from notoriety in the 1970s and 80s to his three-decade role in establishing San Francisco’s main strategy for housing the homeless.

A follow-up book should be written about the enormous public contribution these owners have made to San Francisco. Doshi laid the essential groundwork. Are there any academics interested in following?

Randy Shaw is the editor of Beyond Chron and director of the Tenderloin Housing Clinic in San Francisco, which publishes Beyond Chron. Shaw’s latest book is Generation Priced Out: Who Gets to Live in the New Urban America. He is the author of four previous books on activism, including The Activist’s Handbook: Winning Social Change in the 21st Century, and Beyond the Fields: Cesar Chavez, the UFW and the Struggle for Justice in the 21st Century. He is also the author of The Tenderloin: Sex, Crime and Resistance in the Heart of San Francisco.