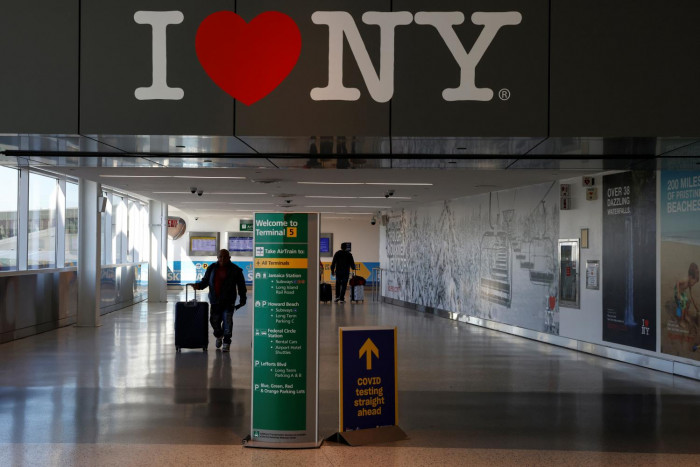 Hotel owners in New York City were hoping for a big boost to their business at the end of the year, as international tourists start to return during what is traditionally a busy time of year.

The hotel division of real estate firm CBRE Group Inc. expects the city-wide occupancy rate to reach around 56% in the fourth quarter.

“We’re going to be getting visits over the holidays, but I don’t think that’s a panacea,” said Rachael Rothman, head of hotel research and data analytics at CBRE.

As city hotels expect larger bookings from domestic visitors arriving for holiday shopping, Broadway shows and to see the giant Christmas tree at Rockefeller Center, Ms. Rothman said that international travel this holiday season is expected to remain moderate, with foreign tourism not resuming until next spring. when the weather starts to heat up.

The holiday season is a critical time for New York City hotels and is generally a major driver of accommodation revenue for the fourth quarter.

In 2019, the city’s hoteliers billed some of their highest rates of the year in the first two weeks of December, surpassed only in the last week of September, when world leaders gathered for the General Assembly of United Nations, according to hotel data company STR.

Sightseeing visits to New York City fell 67% last year from a record 66.6 million in 2019, costing the city an estimated $ 1.2 billion in tourism-related tax revenue , according to state comptroller Thomas DiNapoli.

NYC & Company, the city’s tourism arm, estimates that tourism will not reach pre-pandemic levels until 2024.

Hotel owners were hoping that foreign visitors – who this month were allowed to enter the United States with proof of vaccination – would flock to the city as its main attractions resume.

The Macy’s Thanksgiving Day Parade is once again open to the public, as the Radio City Rockettes take the stage again. Vaccinated revelers can return to Times Square to watch the ball drop on New Years Eve.

Foreign tourists are important because they tend to stay longer and spend more money than domestic visitors.

Chinese tourists are among the top spenders, according to the comptroller’s office, but China currently requires its citizens to be quarantined for weeks after returning from overseas, making it unlikely that a significant number will visit. in New York in the coming months.

According to travel analytics firm ForwardKeys, bookings for international flights to New York for November were 45% lower on November 15, compared to the volume of bookings at the same level two years ago.

Bookings for December were 33% lower than 2019, the company said.

At Knickerbocker, a luxury hotel in Times Square, the occupancy rate and average daily room rate are close to 2019 levels, said Shannon Knapp, president and CEO of Leading Hotels of the World, which represents the Knickerbocker. and three other luxury hotels. in Manhattan.

“Right now I feel good where we are for the holidays,” she said.

Yet a poll conducted a few weeks ago by Morning Consult for the American Hotel & Lodging Association found that only a third of Americans are likely to be traveling for Christmas and even fewer will be on the road for Thanksgiving. Of these travelers, less than a quarter planned to stay in a hotel.

A major challenge for hotel owners is that visitors book rooms on a short-term basis, often within two weeks of their trip.

Michael Achenbaum, president and founder of Gansevoort Hotel Group, which owns a 186-room luxury hotel in the Meatpacking district, said this short booking window makes it harder for hotel owners to anticipate occupancy and increase the rates accordingly.

Mr Achenbaum was able to require reservations of at least two nights during the first weekend in November, the first minimum stay requirement since the start of the pandemic.

The hotel, which underwent a $ 30 million renovation last year, sold deluxe king-size rooms for $ 855 a night this month. The demand was lower than what Mr. Achenbaum wanted.

“People are reluctant to commit too much,” he said.