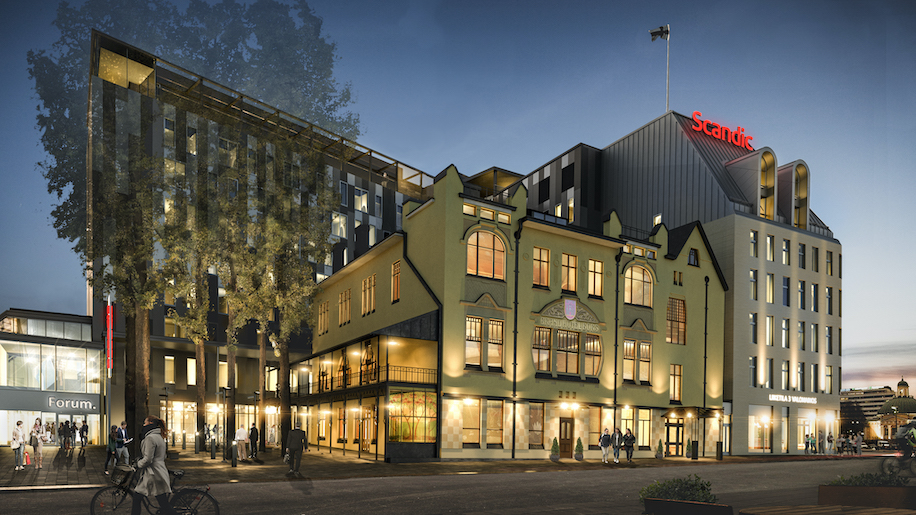 Scandic Hotels has opened a property in the Hamburger Bors building in Turku, Finland.

The hotel group signed an agreement with owner LahiTapiola in 2017 to operate a property in the historic building. While the old Boss building dates from 1885, it was joined by a newly built annex by Schauman Architects.

The 272-room hotel is located opposite the Market Square in central Turku and the new building houses the hotel rooms, reception, lobby, lounge and restaurant. Meanwhile, the eight meeting and banquet rooms are located in the Art Nouveau wing of the building, which dates from 1885, with a walkway connecting the conference rooms and hotel rooms.

Rooms feature Scandinavian interiors by designer Jaako Puro of Puroplan Oy, with a warmer color palette “to create a relaxed atmosphere”, and offer views of the market square or courtyard, while top-floor suites have of arched windows with nooks.

The dining areas include a new Spanish restaurant at street level called Mas, the terrace restaurant Bars Poheikko and the rooftop bar Bors Katto on the ninth floor. The hotel also has a gym and sauna.

Aki Kayhko, head of Scandic Finland, commented on the opening:

“We are delighted to be able to give a third life to this historic hotel in Turku. Turku is an important tourist destination for Finland and there is great interest in visiting the city from both domestic and international tourists. For vacationers, Turku is an interesting destination as well as a gateway to the Finnish archipelago. It is also a gateway for international cruise traffic and significant passenger and cargo traffic to and from Sweden.

Scandic currently has over 280 hotels in operation and under development in over 130 destinations.

Tripadvisor: 55% of Americans plan to travel this winter